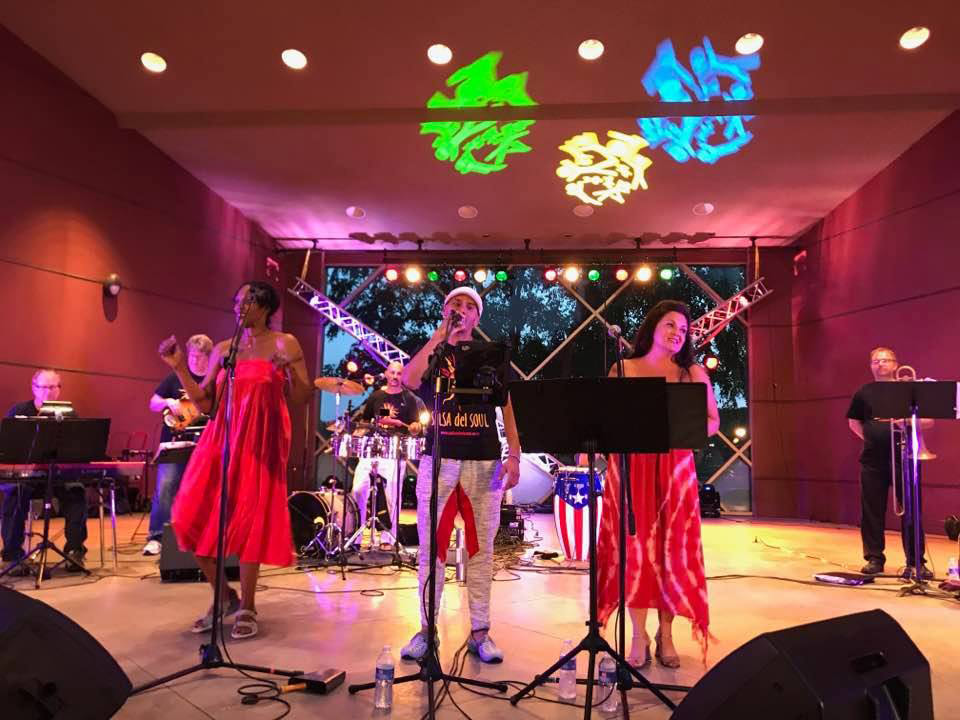 Caravan du Nord: Featuring the music of Salsa del Soul, High 48s and Cyr & the Cosmonauts
​Saturday, October 16 - 7:00 p.m.
The Caravan du Nord is a traveling showcase of Minnesota music, bringing top regional acts, emerging bands and music industry professionals to towns across Greater Minnesota for a weekend of workshops, networking and performances. The Caravan’s evening in Worthington features three bands: Salsa del Soul – a seven-piece orchestra performing various styles of dance music from the Spanish-speaking regions of the Caribbean, the High 48s -  a young bluegrass group with the soulful sound of classic bluegrass with a modern attitude
and Cyr and the Cosmonauts - a quartet playing eccentric original music that probes for the cosmos in the chaos. Come enjoy a night of Minnesota music with us!
Adult: $20/$25 at the Door. Child/College: $10/$15 at the Door
TWO FREE MUSICIAN WORKSHOPS
Please register for workshops and networking here.
Workshop 3:00 pm - 3:50 pm
Music in Minnesota: Community, Careers, and Creativity, presented by Scott LeGere
This workshop will focus on current trends and opportunities within the greater music industry. With the prevalence of smartphones, streaming, and other new technology, today represents the most exciting era in history for aspiring artists. Now truly become a global phenomenon, popular music reaches every corner of the Earth and continues to spread deeply into new media avenues like film licensing, gaming, live streaming, and much more. Participants will discuss the potential these new developments hold, while recognizing how marketing and audience engagement are essential to help overcome how crowded some sectors of the business have become.

Workshop 4:00 pm - 4:50 pm
Minnesota Music Toolkit Workshop: Resources for Musicians in Minnesota, presented by Joanna Schnedler, MMC
Are you just getting started as a musician? Looking for more information about what is out there to help you at any level? The Music Coalition Executive Director will provide an overview of the MMC programs and resources, what are some other ways to connect and learn, and give a brief overview of funding opportunities for musicians in Minnesota.

https://www.salsadelsoul.com
Salsa del Soul is a Twin Cities-based, seven-piece orchestra performing various styles of dance music from the Spanish-speaking regions of the Caribbean. Salsa del Soul was formed with the purpose to provide great dance music for Twin Cities Salsa fans. The musicians of Salsa del Soul represent some of the finest talents in the Twin Cities Latin music scene. The styles of music they perform include Son, Son Montuno, Plena, Cha-cha-cha, Bachata, Timba, and, of course, Salsa! Salsa del Soul performs locally at restaurants and bars, jazz and Latin festivals, private engagements, and other locations and events.
Salsa del Soul has been making superb dance music around the Twin Cities and the Midwest region for more than a decade, providing top-notch talent delivered in the most professional fashion consistently and expeditiously — the fruits of which can be recognized in Salsa del Soul's long list of clients and long-standing performance venues.
https://thehigh48s.com

Since forming in northeast Minneapolis in 2006, The High 48s have been making music that combines the soulful sound of classic bluegrass with a modern attitude.
They’re a band with one foot in tradition and the other in the world of music today,  and one of the very few who can find an overlooked bluegrass classic in a song by M. Ward or the Clash then throw down hard on a standard by Bill Monroe.
The High 48s are also a band of songwriters. Here, too, they take a modern approach, heeding the well-worn advice to writers: write what you know. Their songs ring true to their lives as northern city-folk rather than an imagined “sweet, sunny south” of coal mines and dark hollers.
In addition to keeping up a busy performing schedule, the High 48s are passionate about music education and in demand as instructors, teaching one-on-one, online and in workshops and jam camps around the country, including their now twice-yearly bluegrass jam camp for kids, Grass Seeds Academy.
In 2017, the band released their eighth studio album, Daddy Was a Bank Robber. This recording is their most personal release yet, with original music and a handful of covers that represent a musical snapshot of the band’s very eclectic record collections, including songs by alt-country great Robbie Fulks (“Goodbye Virginia”), bluegrass maverick John Hartford (“Long Hot Summer Days”), blues singer/guitarist Little Milton (“Let Your Loss Be Your Lesson”) and the Clash (“Bankrobber”).
In 2018, the 48s welcomed guitar phenom Clint Birtzer into the band. Though only 25 years old, Clint is already a bluegrass veteran, with three Minnesota State Flatpicking Championship wins under his belt as well as thousands of shows and a long back catalog of album releases with newgrassers Sawtooth Brothers.
The band takes its name from railroad slang for the boxcars originally used to transport troops on the front lines in WWI that could carry 40 soldiers or 8 horses, and were later used in the US on fast-moving “hot shot” freight trains by train-hoppers looking for work during the Great Depression.
https://cyrandthecosmonauts.com

Cyr and the Cosmonauts began with the core duo of Eric Cyr (guitar, vocals, songwriter) and his sister Rachel Cyr (vocals). The duo has performed in Duluth, MN and the surrounding area since 2014, and in 2018 Eric won the Beaner’s Central singer/songwriter contest.Cyr and the Cosmonauts consists of Eric and Rachel with Brady Kamphenkel on drums and John McLoughlin on keys. The quartet performs Americana and Rock music with tight vocal harmonies, explosive dynamics, space to breathe and space to blast. Their eccentric, original songs feature probing lyrics and search for the cosmos hidden in the chaos.
In 2018, Cyr recorded their debut album Callused at Sacred Heart Studio in Duluth, MN with Peter Brown on keys, Keith Yanes on bass, and Sten Duginski on drums. The album was recorded and mixed by Tom Fabjance (Trampled by Turtles, Low, Big Top Chautauqua) and mastered by Huntley Miller (Bon Iver, Sylvan Esso, Ben Howard). Callused was released on November 16, 2018.
Callused weaves together a story that is at the same time personal and universal while musing on the mundane, the beautiful, and the places where the two meet. It is a catalog of ten songs that have grown out of Eric's life and experience in the last ten years, songs that he hopes can resonate with truth and beauty within each listener.
In 2021, Cyr and the Cosmonauts released their follow-up album Songs to Sing Before We’re Dead, an album rooted in Americana but as eclectic as your old man’s record collection. Songs to Sing Before We’re Dead delivers songs to live to, love to, die and resurrect to.
Buy Tickets!